My latest pet peeve is this persistent insulting trend of books that are about women that have "girls" or "girl" in the title. I am now boycotting all such books. I don't care HOW good they are. This stealth sexist bullshit by reducing adult women into the role of a powerless "girl" has to stop somewhere, and it's going to stop at my pocketbook. I walked through one of the last remaining Barnes and Nobles in my area and I counted--I AM NOT JOKING--eight books with the word "girl" in the title, And I wasn't even looking. I was just strolling along trying to find a Father's Day present for my husband. Did I see ONE book with the word "boy" in the title. I did not.
Posted by Claire M. Johnson at 9:08 AM No comments:

What Have I Been Doing?

First of all, I have been writing, yes I have. I stretched myself and wrote a short story. I know that sounds backwards, but while I admire like whoa those people who can write short stories, I'm like, nope. Not my word salad. But a friend approached me about contributing to this anthology and although I said no, somehow I said yes, and I pushed myself. It was an interesting exercise in stepping out of my comfort zone. It's not a mystery anthology, but something entirely different--when I go outside my wheelhouse, I don't fool around. The basic premise was, hey, you have two Greek gods, Debris and Detritus, go write. Anyway, I did it! The cover is amazing. 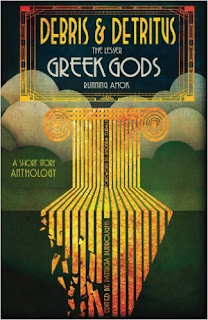 What else have I been doing? Knitting pussy hats. Because, I cannot state this more clearly, I am appalled, disgusted, and horrified at the threats being made on a daily basis to our democracy, and I am knitting my little fingers to the goddamn bone and passing these hats around to anyone who wants one. Because we are persisting. Even my 86-year-old mother is knitting pussy hats because she is so appalled. We won't be shouted down, and we won't be silenced. If you want a pussy hat, email me. Also, I've been playing around with the standard pattern that floated around the internets because it seems like this should be knitted in the round, and, indeed, it should. Below is my version.

Pussy Hat in the Round

1 skein of cheap pink yarn. I bought a gigantic skein of the cheapest yarn I could find at Michael's. Works great.

Cast on 81 stitches. To join, cast-off one stitch so that you now have 80 stitches. Place a stitch marker of some sort so you know where the beginning is. Work in a 2 knit, 2 purl rib for 4 inches. Switch to a knit stitch for 4 inches for a total of 8 inches. Cast off. Sew the top seam and you're done.