So, I'm turning over the reins to someone else for this installment. Camille Minichino is one of the reasons why I'm a published author.  She's the sort of person the word "stand-up" comes to mind. Tireless in her support of my writing, I'm only one of a legion of writers who she's championed over the years. But I'll let her speak for herself. She does it better.

Action heroes in geopolitical thrillers don't have a lot of time to cook or even to stop for a snack, what with aborting the assassination of a world leader, keeping greater Los Angeles from falling into the Pacific, or saving the world from total nuclear destruction. Imagine a Jack Bauer-like man of action in a cave in a country ending in –stan, pulling a spinach and cheese soufflé out of the oven.


But cozies, or traditional whodunits, are designed for comfort, with nothing too graphic to deal with and justice for all in the end. And nothing says comfort like food, whether it's a special gravy or brownies with icing.
Sophia Loren, nee Scicolone, said, "Everything you see I owe to spaghetti."
(I doubt it. Not with that body.)
I express my Italian-ness at dessert time. I'll pick at the pasta, pass on the chicken and veal parm', and double up on panna cotta and gelato. My first protagonist, Gloria Lamerino of the Periodic Table Mysteries, eats this way and looks more like me than like Sophia. Gloria's fictional diet is like my real diet, with lots of affogato and tiramisu and three kinds of biscotti. Much to my embarrassment, cannoli appear at least seven times in my first novel, "The Hydrogen Murder."
Did you think it was a coincidence that I'm starting my July blog tour for "The Square Root of Murder" on the site of a pastry chef?


Food and drink are the writer's friends, setting-wise. They hit all the senses and immediately establish the ambiance. We feel the textures in a mouthful of endive and bleu cheese, see the array of colors in a multi-bean salad, breathe in the aroma of fresh baked bread, and taste everything. We can hear the bubbles of sparkling water and the sizzle of a steak on the grill. A few food words—coffee and an almond croissant, French toast with thick strawberry syrup—and we've got the reader salivating. 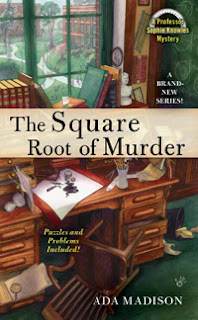 Menu choices are also a giveaway device to identify characters. We build expectations about the person who orders the shrimp salad as a main course vs. the one who craves a burger and fries. Whereas in life, the same person may enjoy both at different times, in fiction, it works better to nail down a food trope.
I did my first protagonist, Gloria Lamerino, a favor by giving her a love of garlic. I hate it, and all my life have had to answer the question, "How can you be Italian and not like garlic?"
In my defense, I've come up with Italian G words that I do love: Galileo, Ghirlandaio, Ghirardelli, Gilda in Giuseppe Verdi's Rigoletto, maybe even Garibaldi. (But not Garofalo, though I think she'd be great as Gloria in the movie version I've dreamed up.)
There also seem to be gender roles with regard to food in books and movies. Men make pancakes; women make salad. Women always have a baguette sticking out of the grocery bag; men carry six-packs. Men bite into a donut; women pick off a few molecules of a muffin and utter "Mmm." And of course, with some celebrity exceptions: men are chefs; women cook.
As a reader, I tend to judge characters by what they cook (or not) and what they eat. As a mystery writer, one thing I know: I could never kill a pastry chef.

Camille Minichino is a retired physicist and dessert lover turned writer. Her akas are Margaret Grace (The Miniature Mysteries) and Ada Madison (The Professor Sophie Knowles Mysteries). The first chapter of "The Square Root of Murder," debuting July 5, is posted at http://www.minichino.com.
Posted by Claire M. Johnson at 7:43 AM 7 comments: