Back in the days before Bridge Baron, I was a crossword puzzle freak. Surfing around on the net--god, I love the Internet--I found a plethora of crossword puzzle maker sites. The first person to finish gets a free copy of my book, Roux Morgue. Have fun. It's tricksy! 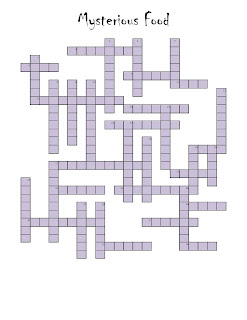 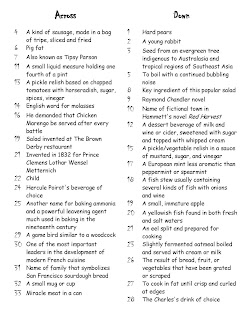 It's my mother's birthday today. She's an extraordinary woman, not for the large things she's done (not that she was a slouch in her career--far from it), but one of those unsung heroes who concentrate on the small. As in: knitting baby blankets for her neighbors who are expecting; carrying dog treats at all times because you never know when you're going to meet a dog; having the new widow over for dinner; that sort of thing. It's not large stuff, but as you age you realize that small things sometimes aren't so small, you know? My parents have become the majordomos of the small cul-de-sac that they live on, the people that the neighbors come to when there's a problem. Why? Because people know that they care.

When I was younger I believed I had it covered; I didn't need anyone to watch my "back." And I grew older and realized that, no, it's not covered and perhaps it was never covered and, god, do I have a bulls-eye or something because I keep getting hit with metaphorical arrows. Mom's always there with whatever emotional band-aids she's got in her "mother" arsenal, patching me up and sending me out into the world as "healed" as possible.

I've entered a point in my life where my friends' parents are dying. My father died a couple of years ago, and while I mourn him, I mourn the person he wanted to be, not the person he was. That's easy mourning because that person isn't real. With my mother, it will be bone-marrow deep mourning because she's really pretty goddamn perfect as a mother. Not that she's perfect as a person, but she's a phenomenal mother.

So hat's off, Mom, because words really are inadequate to express how much I love and admire you.
Posted by Claire M. Johnson at 7:13 PM 2 comments:

What I failed to mention in my previous post was that you must see this movie and sit through the self-indulgent Julie bits to see the marvelous and superb and OMG! acting chops of Meryl Streep. Something else that I didn't mention and really, this is so important. I imagine the people who go to movies and watch chase scenes or want to hear snark or chortle at my dick is bigger than your dick sensibility (I am now done with Judd Apatow) will find this movie incredibly dull. It's about marriage and relationships and passion. Jane Austen territory, frankly.

Anyway, the real point of this post today is about blogging and how me! me! me! centric the concept of blogging is. Which, as you recall, was the problem I had with the Julie bits of that movie. Also, an aside here. Am I the ONLY one who has trouble with it being called Julie and Julia? Ahem. You are piggybacking on the fame of the most famous American chef of the last half century and you don't even have the courtesy to give her top billing? I think that says, uh, volumes about the entire project.

I have trouble keep up with this blog because it's not interactive enough. It's ridiculously difficult to respond to people who do comment, and although I have a fairly sizable ego, it really isn't about me. I'd like it to be about "us." Where you can email me and say, "Well, I thought that movie was perfectly lovely and this is why..." I don't mind discussion, dissension, or even vague hostility. Because now we can talk!

This is why I will never, ever have a Twitter account and why I find Facebook similiarly irritating. Both mediums are geared toward people making pronouncements, ninety percent of the time about themselves. I'm writing. I'm cooking. I just cut the tip of my finger making a peach pie for the guests coming over to dinner tonight. Crap, it hurts. It's all about the person typing (or not or at least not well because I did make a peach pie today and my finger does hurt). In fact, I went to respond to a friend of mine who commented on my Facebook link to the review of J&J, and I proceeded to write a reply and found to my horror that I couldn't even finish my paragraph. Word limit. WHAT?

This isn't social networking, it's aggrandize-working and to me it feels like the other half is missing. Not that I want one hundred people to comment, but I dislike this sense of a vaccuum. That I'm talktalktalking about me. Not that I don't have plenty to say, but dialogue is a hell of a lot more fun.
Posted by Claire M. Johnson at 2:25 PM 2 comments:

I should preface this by saying that I was fortunate enough to have met Julia Child and her sister, Dorothy Cousins, when I was still a student at the California Culinary Academy. This was at the beginning of the food revolution in California, and the school was hosting a benefit. The speaker list included the usual culinary stars of those days. I'm not going to list the speakers because, with a couple of important exceptions, the tone of the evening was all pretty damn snooty and snotty and elitist, and it was one of those "what in the hell am I doing in this profession" moments.

Julia and her sister were the last to arrive. The movie does a great job of emphasizing how physically imposing they were, but it can't possibly do them justice. I'm fairly tall for a woman, and yet when they entered the room, side by side, there was a little hush. Because they weren't so much as imposing as just THERE. They were large women, but not in the sense of present-day jargon. Tall and healthy, they both looked like they could probably break the neck of a five-hundred pound steer should the occasion warrant it.

And the one thing that the movie did capture so well was the connection between the two of them. Dorothy was a little taller, and she'd lean over to talk to Julia, and Julia would have this intent look on her face as she tried to hear her sister over the din of voices, and there was NO sense of this celebrity and her sister. No sense that Julia was forcing her sister down everyone's throats. It was just McWilliams girls out for the night.

I asked her to autograph a cookbook for my mother, and it wasn't whipping out the pen and a quick scrawl. She ASKED about my mother and when she'd signed the book (Julia Child and Company, by the way), she said to me, "Aren't you sweet? I do hope she likes the book." It wasn't a staged scenario. I came away from that encounter thinking, "Oh, she's tall, and, oh, thank you for saying that I'm sweet, and I know my mother will love the book."

Again, I'm not going to name names here, but the high point of the evening was when another speaker got on his/her high horse about some sort of nonsense that doesn't bear repeating; basically, people were jockeying for position and fetishizing food as a way to get there. The speakers were sitting in rocking chairs, and by the end of this insufferable speech Julia was rocking so violently that I half expected it to fly off the dais. In the nicest way possible she put this person in his/her place and basically said, oh, please. It's just food and we should enjoy it, but it's not a religion. She brought the entire tone of the evening back to earth. Which was, I think, her true gift. Yes, she could cook and had a delightful personality that television showcased so well, but in the end, she was someone who enjoyed a damn good meal with a decent glass of wine, surrounded by friends and/or family. Which is precisely why I went into cooking.

And that's why the Julie part of the move fails so miserably, and I don't even think that the director got it, and certainly the writer, Julie Powell, didn't get it. Because the cooking was never about Julia Child tooting her own horn. She loved food because food was lovable. She understood it and she undoubtedly had a phenomenal gift for it. But what the movie so lovingly portrayed was that her marriage and her relationships with people were the key, with food being an important satellite. During the numerous scenes when they are having dinner parties or eating in restaurants, the movie doesn't focus on people loving Julia Child's cooking. The movie focuses on Julia Child and her wonderful husband and their special relationship and the fact she's a funny, intelligent woman. And a damn good cook.

Cut to modern-day Julie portions of the film: the movie (and I imagine the blog) focuses on Julie and how SHE'S becoming a good cook and how her husband and everyone else are satellites. I don't know how faithful this is to the blog, but I will say from the movie that Julie Powell has a bunch of really ugly, unhappy, and obnoxious friends. I assume that this is what propels her into the kitchen in the first place, but the repeated cutting back and forth between a woman with a hell of a lot of self-respect to a woman who has none and who basically embraces her "bitch" cannot help but come off as, well, bitchy and self-serving. The modern-day dinner parties are all about the food. How good this is. It's great. Man, I love this. They might as well be at SEPARATE tables because there is no camaraderie between any of these people. I disliked them. I didn't see Julie's accomplishments as anything but a leap-frog off of Julia Child's accomplishments. Because it was always about the food and Julie Powell saying, "SEE! SEE! ME! ME! I MADE THIS!"

Which, having watched her television shows and owning every single one of her books, Julia Child never said.
Posted by Claire M. Johnson at 9:32 AM 8 comments:

Started writing new book. Am very excited. Am sure everyone else will hate it. But, am I having fun!
Posted by Claire M. Johnson at 4:16 PM 2 comments: