Fair warning: this is a post about my dog and not a book review. I have read that book, which has its charming bits but kind of falls apart at the end, and once again I find myself wondering what makes Hollywood select one book over another to option. I had a similar reaction to the movie, but I do like Diane Lane and John Cusack a lot, so I was willing to actually see it in a theater (even though it's definitely only netflix caliber).

This is a dog post inspired by the fact that I came downstairs this morning and once again the dog's water dish was empty. Now my bedroom is an addition squatting over the garage, and we have to keep our bedroom door open because we have a cat who sees a closed door as an act of war, so I can hear anyone who comes into the kitchen. I know that several people (glares at husband, daughter, and son) came into the kitchen after I went to bed and did not check the dog's water bowl.

Which I do every time I enter the kitchen. 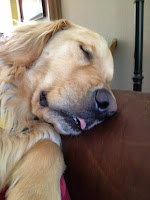 This is why the dogs always love me best. Love me with that adoration that only dogs can bestow, that, I will do anything for you, you r teh bomb, you are the first thing I think of when I go to sleep and the last thing I think of, kind of love. In humans this is psychotic stalkerish behavior, in dogs it's pretty normal.

The kids resent this because they know on one level they are much cuter. But they aren't consistent. Those same mommy genes that program me to know when they have a cold before they have a cold, ask them if they've eaten in the last three hours because I suspect not because they are as cranky as a bag of weasels (blood sugar issues), and always remind my daughter to bring a sweater ANY WHERE we go because the girl is half lizard are the same genes that make never forget to feed the dog and fill its water dish. Dogs are simple creatures. They really only have three speeds: affectionate, giddy, and mopey. We have a Golden and he really does get a wee bit giddy. He also gets mopey if I'm not home. But mainly he's just plain affectionate.


They can also be maddening, as when their biological imperative to chew ends up destroying the drip system, lawn chairs, and plants. I remember piling up numerous tales of chewing woe to regale my vet with, only to be told, hmmm, not that much of a chewer for its breed. NOT MUCH OF A CHEWER??????????? Then I remember the previous dog who ate through a sheet vinyl floor (so that we had charming patches of duck tape over the holes for five years as that remodel was going to happen any day), stripped the wall paper off the kitchen walls (which my husband replaced with "wainscoting," which I put in quotes because it was that sheet plastic you see in fast food restaurants), and drip system number 1. No, we didn't learn our lesson, and when it came time to think about another dog--or, to be honest, the kids and I were thinking about another dog; my husband is an unrepentant cat person, I wonder why--we broke down and got another puppy.

Bear is now over two years old and is probably the sweetest dog on the face of this earth. How sweet? Even my husband likes him. And truly, I can have the crappiest day in the world and I know there will be someone who greets me with uncomplicated adoration when I walk in the door. Just because it's me.

And because the second thing I do after dumping my purse in a random chair is to check his water dish.
Posted by Claire M. Johnson at 7:33 AM No comments:

And Then This Happened

Things have been unsettled for several months. I hit a horrible patch at work, my mother became ill, my kids graduated from high school and college, and I don't know what to do with my writerly self. Well, I sort of know. I have this Jane Austen pastiche that I need to self-publish. I have reached the point where it's nearly there, but the nitty-gritty details have to be dealt with. And being detail oriented at work means that being detail oriented the rest of the time is difficult. I want a break from details! But now that things are sort of stable, I need to sit down and wade through the minutia of this process.

What do I do next? I have a fabulous idea for another Mary Ryan book that I think I could pound out in three months. I have something of a passion for pirates, and I have plans to write a fantasy set in the 19th century. Swashbuckling and the Regency and swords, oh my. I've been reading up on 19th century Britain and did you know that coffee houses were your modern day equivalent of a street corner. Prostitutes plied their "wares" at coffee houses.

And part of my issue is that I edit for my job. It's very difficult to wrangle with other people's words all day and then come home and try to comb your brain for something intelligent to say. Really, all you want to do is watch HGTV reruns with the Property Brothers. Or reread Tinker Tailor Soldier Spy (for the eighth time).