A key thing that usually sells me on a book is what I would call a book's "vernacular." That the reader feels that this book couldn't happen any place else. The dialogue and setting has both an originality and a sense of history about it. This masterful owning of a story is obvious within the first four pages of Broken Harbor by Tana French. I wrote in my last review of her previous novel, Faithful Place, that I would eagerly snatch up her next novel because I so loved the writing, even if I didn't love the book. And I find myself in the same place with Broken Harbor as I did with Faithful Place: in lovelovelove with the writing and less than pleased by the end of the book.

At this point I've nearly given up looking for books that ultimately hit all of my buttons, but this book falls shorts in some critical ways. But first, the good part. The dialogue is amazing. I'm no slouch at writing dialogue myself, and this woman blows me out of the water. Not only is it smart writing, but the dialogue rings true to each character. All the characters sounds unique.

French is equally masterful at descriptions. I live in California and we have had our own boom/bust times, with a similar fallout in the housing market. Not an hour from my house the wholesale bulldozing of orchards went at a fever pitch until it stopped when the house of financial cards finally collapsed. And bankruptcies and the foreclosures and all the fallout from the machinations of venal Wall Street, unscrupulous bankers, and unethical builders began. I understand this so well, although my wasteland is characterized by former farms and not a rundown beach town. French does a picture perfect job at creating this land of broken dreams.

There is a beautiful parallel story between Scorcher Kennedy and the Spains, and how control can be one's savior and one's damnation. I think this is my favorite under thread in the whole novel. I would say that this is another reason why the ending didn't work for me. Because when Kennedy ends up planting evidence as a manifestation of how his control has finally broken down--for good AND bad--we actually don't need this scene. His behavior in his final interview with Conor Brennan demonstrates all too well that this man has crossed over his personal line from which he can't return. This book is about people crossing over personal lines from which they can't retreat.

The plot in this book is rather thin. It's primarily a psychological drama with a murder thrown in to give it structure. That's why when the book breaks down in the last third. This breakdown is profound, because it all hinges on how much you buy the psychological trajectory of these characters. If you don't buy it, then the novel won't work for you, and ultimately it didn't work for me.

As with Faithful Place, Ms. French tries to be too clever. This ending is meant to shock, and it doesn't shock so much as left me scratching my head. What? As opposed to, wow, I never saw that coming. I really didn't see it coming, so much so that I didn't believe it. There have to be powerful reasons why a mother kills her children, and Ms. French did not set this up. Which is also part of the problem. There are far too many crazy people in this book. The evolution of Pat's craziness is done so well. SO WELL. This is part of French's attempt to aha us. Because his craziness is front and center, then we're supposed to be so surprised when Jenny craziness is even more profound than his. Except that aside from portraying Jenny as a shallow and materialistic, we don't understand the leap from shallow and materialistic to murderer. The novel goes out of its way to portray this couple as nice and decent. We sympathize with Pat. His craziness breaks our heart. Her craziness doesn't. And, in fact, it's inexplicable and it doesn't make sense. Also, it's totally unnecessary. The last quarter of the book is a mess and I really don't understand why.

One of the things you do as a writer is to pull part other writers' material. It's part of the learning process, and once you start pulling apart other people's writing, then you find you can't stop. This has had the effect of undermining my reading pleasure and when someone gets it right, it has enhanced it. So, I finished this book and my sigh of displeasure was loud, to be followed by a "why?" She could have easily had Pat kill the kids, which makes sense given that she's laid the groundwork for his crazy, and then have Jenny discover that he killed the kids and she kills him. Conor races into the house, and Jenny asks him to kill her because she can't live with the fact that her children are dead at their crazy father's hand and it's her fault because in her manic determination to keep up appearances, she ignored Pat's decline into madness even as she saw it happen. THAT makes sense. Jenny's long-winded (it went on forever) explanation of that night left me cold and perplexed. And why didn't Kennedy obtain a warrant and be miked so that they could all hear her confession? Because then we wouldn't have had all this drama with the planting of the bracelet. Not only does this not make sense because a woman in her pajamas is NOT going to be wearing a charm bracelet, ahem, it's unnecessary. I can only surmise that French thought we needed a scene where we understand that Kennedy has crossed a line that he never thought he would cross. But we don't need this as an example of Kennedy's personal aha moment; that happened in his final interview with Conor Brennan

Psychological profiles in a psychological thriller have to be pristine. By that I mean the psychology of the characters IS the plot. If there is a glitch in the psychology, then the novel falls apart. Or doesn't work. It's too harsh for me to say that this novel fell apart. The writing here is gorgeous. I envy her so much. But ultimately the novel doesn't work because the psychology doesn't work, and I find myself in the same place I was a year ago: hoping that her next novel will be that perfect book that I know she can write.
Posted by Claire M. Johnson at 9:06 AM No comments: 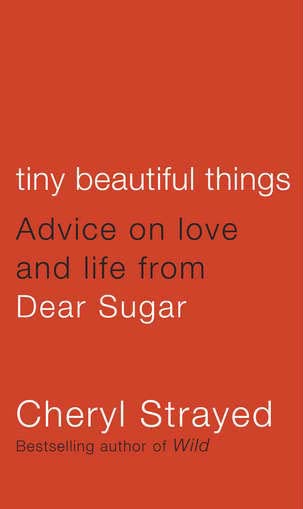 Life right now is, um, very challenging. I'm not going into details but suffice it to say, fucking hell. As is my wont, when life is pelting you with lemons, I retreat into the world of books. This has always been my refuge, and I suspect it always will be. I usually pick up Jane Austen when confronted with devastating life suckage, but I picked up this little gem instead. Hey, I has graphics!

I've been following "Dear Sugar" on the rumpus.net for many months. I can't give you an assessment of her recent success as the author of "Wild" as I haven't read it. All I can say is that "Tiny Beautiful Things" is a wonderful, wonderful book. Sure, this contains excerpts from her advice column as "Sugar," but to dismiss this as  "merely" excerpts from her advice column is to be nothing short of pedantic and snotty. For the writers who follow this blog, there are several letters that deal with writing and being a writer and what this means and what it SHOULD mean. This ALONE is worth buying this book. For others, revel in her writing. I did. She's the real deal. I loved her column, and I love this book. Highly recommended.

Posted by Claire M. Johnson at 7:32 PM No comments: